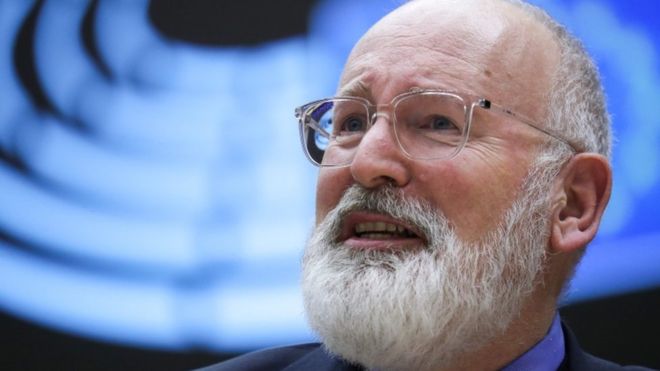 A leading EU official has penned a love letter to Britain, expressing his “deep hurt” over Brexit and concluding: “You will always be welcome to come back.”

“Since I went to a British school, you have always been part of me. Now you are leaving, and it breaks my heart,” the top of the Guardian piece reads.

This will trigger a transition period of negotiations, which Mr Johnson’s EU (Withdrawal Agreement) Bill ensures will not go beyond 2020.

What did Mr Timmermans say?

The executive vice-president of the European Commission starts by saying he “recently read a delightful book of love letters to Europe. And it made me contemplate my love for Britain”.

The Dutch national recalls his time at St George’s British International School in Rome and says that, during his life, “Britain was always there. As part of me.”

He says Britain thinks it is “unique and different” but that this is “perhaps less than you think”.

Mr Timmermans accepts there are differences between all member countries which can both be a positive and negative force, and that things can “quickly get out of hand”.

He says the UK is still in two minds about the EU, and “I see it is hurting you”.

He writes: “Truth be told, I felt deeply hurt when you decided to leave. Three years later I am just sad that a member of our family wants to sever our ties.

“But at the same time I find comfort in the thought that family ties can never really be severed. We’re not going away and you will always be welcome to come back.”

A number of social media posts were positive about the letter.

Former Green Party leader Natalie Bennett, a new House of Lords peer, tweeted the letter was “Something to remember. And thank you.”

Brexiteers were less impressed. Former UKIP general secretary Paul Oakley wrote: “Yuck. Just like a clingy ex, Frans Timmermans has written a soppy letter to Britain longing for our return to the EU.”

What happens after Brexit?

Assuming the European Parliament also gives the green light, the UK will formally leave the EU on 31 January with a withdrawal deal – and it will then go into a transition period that is scheduled to end on 31 December 2020.

During this period, the UK will effectively remain in the EU’s customs union and single market – but will be outside the political institutions and there will be no British members of the European Parliament.

The first priority will be to negotiate a trade deal with the EU, and time is short. The EU could take weeks to agree a formal negotiating mandate, and that means formal talks might only begin in March.

It’s not just a trade deal that needs to be sorted out. The UK must agree how it is going to co-operate with the EU on security and law enforcement.