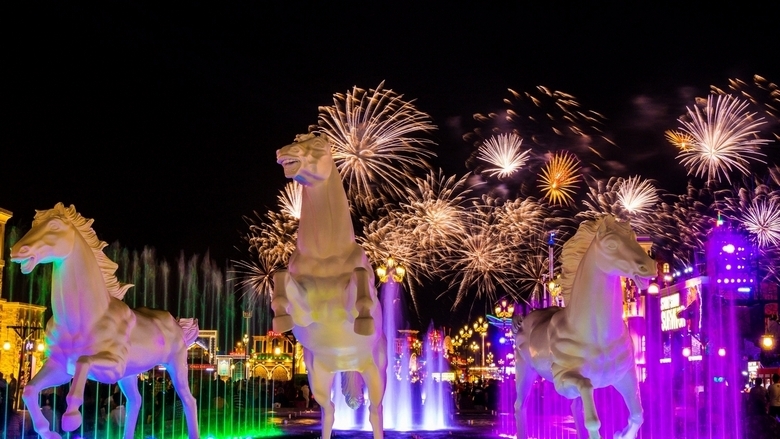 The Dubai Fountains will be showcasing the world’s longest choreographed fountain show ever.

The UAE will ring in the New Year with massive fireworks displays taking place across the country.

>Emaar will host the world-renowned New Year’s Eve show with a firework display on the world’s tallest building.

>The choreographed show will incorporate fireworks, animation on the Burj Khalifa LED Facade, music composition and a fountain show.

>The Dubai Fountains will be showcasing the world’s longest choreographed fountain show ever.

>People can head to either of the family viewing areas in Downtown Dubai to witness the iconic show, which is expected to be viewed live by millions on television and online across the globe.

>Dozens of pop-up food and beverage stalls will be available for visitors to enjoy during their time counting down to NYE20.

The experience can be watched online at mydubainewyear.com

>At midnight in seven different time zones, guests at the Global Village will be treated to impressive fireworks display every hour from 8pm.

>At 8pm Global Village will ring in the New Year in the Philippines with fireworks, followed by Thailand at 9pm; Kyrgyztan at 10pm; India at 10.30pm; Pakistan at 11pm and the UAE at midnight. The final show will be at 1am for Turkey.

>Celebrations will continue till January 7.

>Guests will be able to capture selfies with a huge 21-metre high tree richly decorated with gifts received from around the world.

>Seven holiday packages will be given to seven unsuspecting families. In addition to all these,

>Global Village is offering free entry to every child under seven years of age.

>The events ringing in 2020 in Abu Dhabi includes Resolution, a two-day festival.

>Bruno Mars is set to light up Yas Island’s du Arena with a New Year’s Eve performance as part of Resolution by Night.

>Using three pyrotechnics sky towers, the 10-minute fireworks display on the Abu Dhabi Corniche is open to all.

>It will be supported by a colourful fountain show.

>Visitors will also be able to enjoy a variety of cuisines.

>Among the special features of this year’s fireworks display are the use of pyro-drones, which will start with the countdown to the New Year and going on to recreating the key monuments in the emirate through laser displays and pyrotechnics.

>The pyro-drones will also be used for a grand finale that marks the bid for a Guinness World Record.

>Another novelty factor is the Japanese aerial shell fireworks display, which is being brought to the region for the very first time.