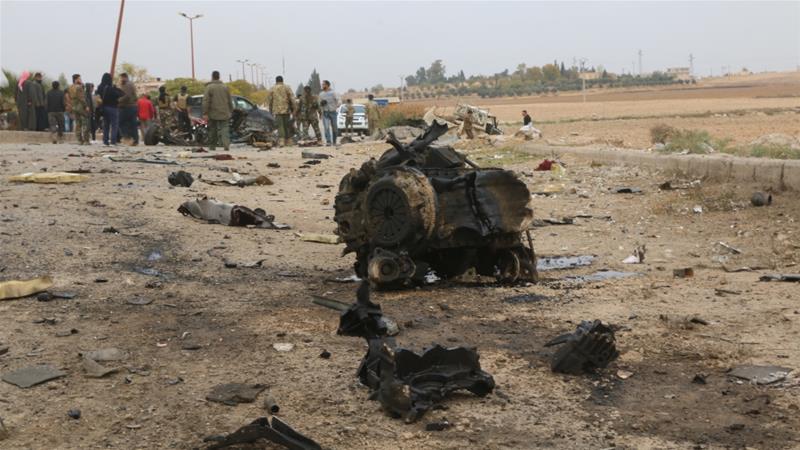 A woman and a child were among eight people killed in a car bomb attack in a Turkish-held border town in northern Syria, the defence ministry said.

The car exploded on Monday in the village of Suluk about 20 kilometres (12 miles) southeast of the Syrian border town of Tal Abyad, the ministry said.

The attack came as a Turkish delegation was in Russia on Monday for talks on Syria, following reports that Russian-backed attacks were forcing tens of thousands more Syrians to flee towards Turkey.

There was no immediate claim of responsibility for Monday’s bombing, but the Turkish defence ministry blamed Kurdish forces who had controlled the town before Turkish troops and their Syrian proxies seized it during a military operation in October.

Turkish forces and Syrian opposition groups launched “Operation Peace Spring” against Kurdish forces in Syria on October 9, aimed at seizing a strip of land roughly 30 kilometres deep along the 440-kilometre border between the two countries.

The operation saw Ankara’s fighters seize a strip of land roughly 120 kilometres long and 30 kilometres deep on the Syrian side of the border.

Ankara says it wants to establish a “safe zone” there in which to resettle some of the 3.7 million Syrians it hosts on its soil – the world’s biggest refugee population.

President Recep Tayyip Erdogan said on Sunday Turkey could not handle a new influx of refugees and was urging Russia to stop the attacks in Syria’s northwestern Idlib province.

The Turkey-based Humanitarian Relief Foundation (IHH) said on Monday 120,000 Syrians were fleeing towards the Turkish border – higher than Erdogan’s estimate of 80,000.