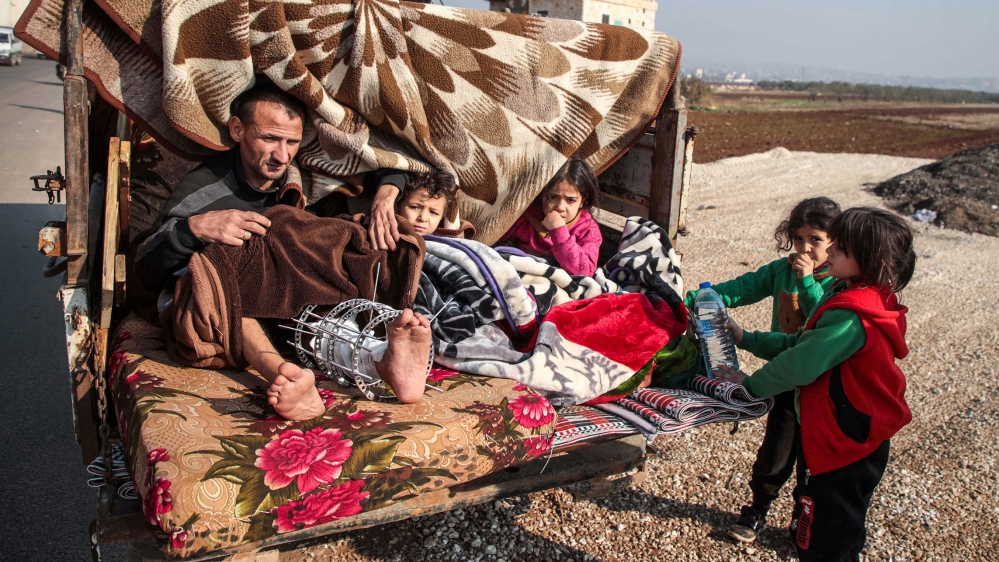 Tens of thousands of civilians have fled parts of Syria’s northern Idlib province towards the border with Turkey as Russian-backed Syrian forces gain ground following days of renewed attacks against the last rebel-held enclave.

Civilians have been fleeing bombardment en masse for a fourth consecutive day from towns and villages eastern and southern Idlib, activists and rescue workers have said, in the biggest such mass movement since September.

“Barrel bombs, air strikes, have indiscriminately targeted civilian structures in the area with the aim of driving out both civilians and fighters,” Suleiman Abdulqader, a local activist in southern Idlib, told Reporters

“The arbitrary attacks are also meant to distract fighters, many of whom have directed their attention towards evacuating their families from their homes,” he said.

These mass evacuations come as Syrian government forces have gained control over parts of southern and eastern Idlib, breaking through rebel groups’ frontlines.

Syrian state news agency Sana reported on Sunday that the army was able to “clear the villages and farms” in the Maaret al-Numaan district, describing at least 20 villages cleared of “terrorists”.

The latest escalation, led by intense aerial strikes on civilian infrastructures in southeastern Idlib broke months of deadlock on the frontlines.

Dozens of civilians have been killed in the past week, according to the Syrian Civil Defence, a volunteer rescue group operating in rebel-held parts of Syria.

Turkish state media said on Sunday at least 25,000 civilians have fled the region towards its borders over the past two days.

Residents and rescue workers in the area said many villages were now empty as a result of the campaign that has displaced more than half a million people since it first began in April, according to the United Nations.

According to reports by Syria’s Response Coordination Group, some 200,000 people fled their homes since November 1, when Russian and Syrian jets escalated attacks in the region after a brief lull.

Russia, which backs Syrian President Bashar al-Assad, and Turkey, a longtime supporter of opposition factions, cosponsored a de-escalation agreement for northwest Syria earlier this year that has since faltered.

Though most families have found relative safety near the border with neighbouring Turkey, the humanitarian situation at the overcrowded border area has been described as “catastrophic” by the UN, which has called for “immediate de-escalation” and warned of further mass displacement.

There are already about one million Syrian refugees living near the border with Turkey, with official camps already at full capacity.

Many of the new arrivals have been forced to stay in makeshift camps despite the harsh winter weather, Ahmed Sheikho, a member of the Syrian Civil Defence, told Journalists.

“The cold and poverty have pushed many to say they would rather die under bombardment than leave their homes … The situation is indescribable,” he said.

Rescue and evacuation efforts led by the Civil Defence, as well as NGOs including Turkey-based Syria Relief and Development (SRD), were ongoing on Sunday evening.

An acute shortage of shelter and medication has threatened the lives of many, especially children and the elderly in the province, while a shortage of medical facilities has also exacerbated the humanitarian situation.

Russia has been accused of carrying out attacks against hospitals and medical facilities throughout its involvement in Syria’s war.

Earlier this year, UN officials said Russian forces may have deliberately targeted hospitals and schools as a tactic to “terrorise” civilians – accusations denied by both Syria and Russia.

The UN early in August established a board of inquiry to investigate the bombing of UN-supported medical facilities in the northwest of the country.

Rescue groups say one of the biggest challenges they face while operating in the southeastern part of Idlib is the threat of being targeted from the air.

While helping families evacuate the rural towns and villages, Dandoush said many who were first adamant they would not leave then “change their minds within the hour”.

“Surface-to-air missiles are extremely loud and are one of the main reasons people decide to pick up and leave with nothing but the clothes on their backs,” he said.

“They say it’s like judgement day … People just want to die together and not have to live another day in fear of losing yet another loved one.”

The Syrian troops on the offensive have captured rebel-held areas in the adjoining Hama province in recent months, as well as the town of Khan Sheikhoun in Idlib.

They are now pushing north, towards Maaret al-Numaan, which sits on the M5 highway linking Damascus with the northern city of Aleppo.

The Syrian government has been battling to take control of the strategic highway, a move that would allow it to connect cities under its control and boost trade.

The region is home to nearly three million people, about half of whom were transferred there in large groups from other parts of the country that were retaken by pro-government forces.

The war in Syria has killed hundreds of thousands of people and displaced millions since it erupted in 2011 with the repression of anti-government protests.