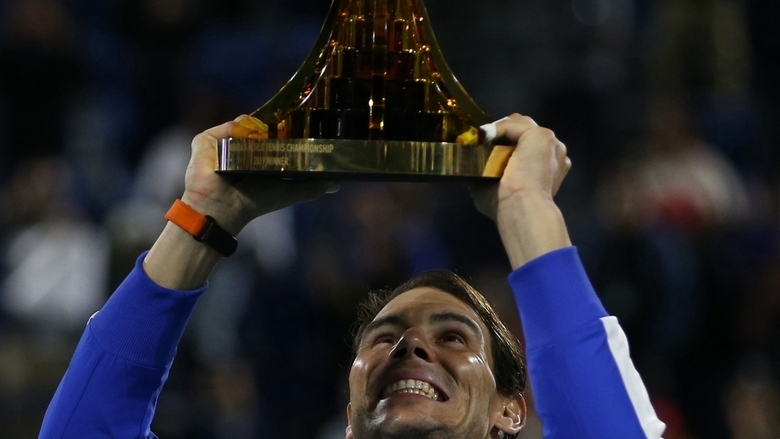 World No. 1 Rafael Nadal said pool of next generation players will soon topple the Big Three – Novak Djokovic and Roger Federer. The trio had to find ways to stay competitive and fend off the challenge.
At the Mubadala World Tennis Championship, the 33-year-old Spaniard was pushed to the limits by the youngest player in the top 10 – 21-year-old Stefanos Tsitsipas. But after three hours, Nadal prevailed over the Greek star to take his fifth MWTC title.
In the post-match press conference, Nadal, who has won 19 Grand Slams, said youngsters like Tsitsipas will soon be in the top three.
“It’s normal human evolution. We are – 33-and-a-half me, Roger 38 and Novak 32 and probably a half. So it’s natural. It is the cycle of life that the new generation is coming. It’s a real and very good generation. So, it’s going to happen, I don’t know in how many months, but of course it’s going to happen. They are good. We can’t avoid the situation, the real thing. We are not able to play 20 weeks per year but young guys are able to play and with the highest energy. We need to find a way to have a good schedule, to keep being competitive in the moments we need it. And it’s a different situation for them than for us but we are still here and fighting for important things.”
And Nadal did fight Tsitsipas till the last point of the tie-breaker. When down, Nadal dug deep like a champion and took the title. Nadal hoped to continue the success of 2019 into the new season.
“The motivation is to keep doing something that is not forever. Keep doing something that you have prepared all your life to do, and honestly it’s a present for me to be able to keep enjoying this sport at the highest level at this point in my career. I want to try to stay as long as possible in this situation, so that is why I am doing things the right way every single day.”
Meanwhile, Tsitsipas pointed out that Nadal was a great fighter who gave his soul even in an exhibition match. “I have never played this long even in normal matches,” he said after the 3 hours, 12 minutes encounter. “He prevailed at the end.”
Before the final, Tsitsipas had dominated Djokovic in the tournament semifinal. The World No. 6 feels he need to be more aggressive and aims to do better in 2020.
“I just need little more focus and concentration when I serve. If the will is there to do well, then I feel like I can play against anyone and beat anyone. It’s all about confidence and focus. I have lot of tournaments to play next year. I want to do better than what I did last year that’s for sure. For me, it’s just trying to play good everywhere regardless of place and location,” Tsitsipas added.
New season promises great battles between the young challengers and established powers. Abu Dhabi tournament has set the tone for an explosive 2020.