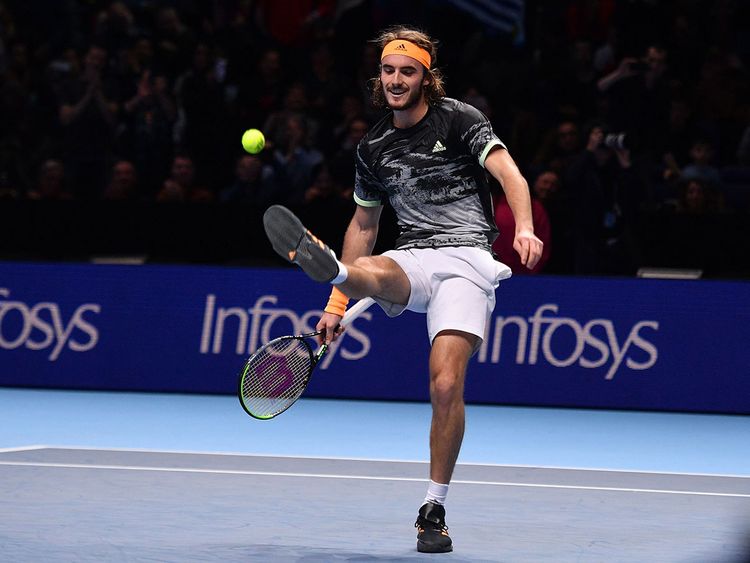 Abu Dhabi: He’s been called many things, from a philosopher, to this journalist asking whether ‘hippy’ was ever a term he was hit with. But irrespective of what character he identifies with, one thing remains unchanged: Stefanos Tsitsipas is certainly one of tennis brightest talents.

Widely tipped by many to take over as flag-bearer from the revered trinity of Rafael Nadal, Novak Djokovic and Roger Federer, who have ruled the men’s game for nearly a decade, Tsitsipas was at his charismatic best during a press meet organised on the sidelines of the Mubadala World Tennis Championship (MWTC), that starts in Abu Dhabi on Thursday.

With talent that has elevated the Greek to a ranking high of world No. 6 in the short span of three years since he turned professional, Tsitsipas must consider himself blessed. Not content to just take over at some point in the future, Tsitsipas is making upsetting the stranglehold of the ‘Big Three’ his prime target for 2020.

In a form of performance rhetoric, Tsitsipas first walked then talked and put the writing on the wall, when overcoming 20-time Grand Slam winner Federer and then Dominic Thiem, the world No. 4, en route to his biggest prize yet — the ATP Finals title, which he secured in London in November.

With his ‘Vision 2020’ set at breaking into the top three, Tsitsipas gets his MWTC campaign under way against Andrey Rublev in the tournament opener at the Abu Dhabi International Tennis Complex at 4pm on Thursday. He will be looking to get right into his groove as the New Year beckons with him travelling straight to Brisbane for the inter-nation ATP Cup.

“I understand that our tennis era is changing in a way and our top three are getting older and we are the ones that are coming up.

“One of my goals for next year would be to win a Grand Slam title and finish the year in the top three, make the ATP World Finals again and win a Masters 1000 event,” Tsitsipas, 21, said. “But I don’t want it [winning Grand Slam title] to be a matter of life and death to me.

“I’ve been very aggressive playing my tennis and I’m getting to know what works for me and what I need to focus on when I’m on court so it all comes with experience.

“I didn’t have that much experience before because I hadn’t spent that much time playing, but the more I get to play the top guys and the more competitive games I play, I’ll keep learning. You can’t win if you don’t lose, that’s how it works.”

That’s Tsitsipas the philosopher making an appearance with the optimist and the pragmatist emerging next.

“Nadal, Djokovic and Federer have always been there and they will be there and what I have to do is go the extra mile and surpass them that is my biggest challenge for next year, to surpass one of them and finish in the top three,” he said.

“I’m currently living in the best period of my life, with the best people around me. I really feel like this is very important for my balance and my thinking. I want to start well because we are at the beginning of the season and it’s a major tournament even though it’s an exhibition game it’s going to be a challenge for me facing Andre.

“We’ve played against each other in the past so I know his game but he actually had a pretty good end to the year. I don’t know what’s his form right now, but I’m trying to bring the best out from my game.”

Focus on self is bound to deliver his goals. And 2020 could be the year for the Greek.